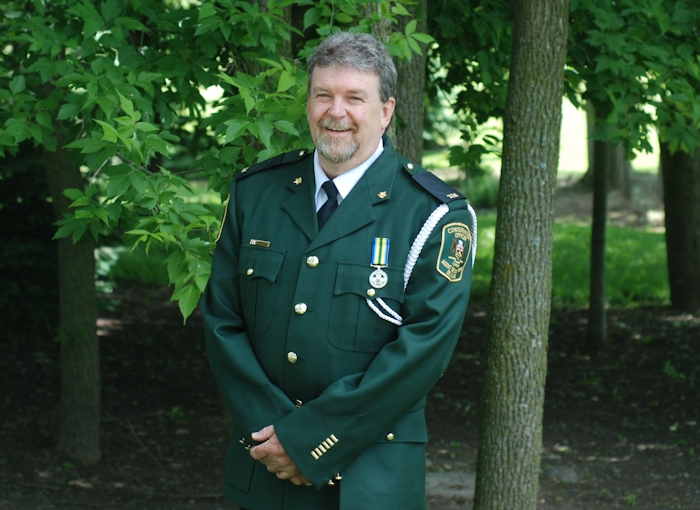 Mark Bailie has been selected as the 2018 Ontario Conservation Officer of the Year.

Mark has been dedicated to natural resources law enforcement for over 30 years and to this day he continues to show the same amount of ambition and passion as he did when he was a greenhorn officer just embarking on his career. Mark has gained an extensive amount of experience through occupying roles such as: fisheries officer, provincial prosecutor, field conservation officer, district investigator (DI) and intelligence investigation officer (IIO) and coach officer. Mark’s portfolio is very impressive and demonstrates how his exceptional character allowed him to adapt to diverse roles and therefore symbolizes a true leader.

Mark is an accomplished investigator who has demonstrated his commitment to the job and to protecting the public and our natural resources.

For example, Mark was instrumental in leading field operations in an investigation relating to a sport-fishing television show which had implications for professional anglers all across Canada and even North America. The Ministry of Natural Resources received a complaint involving she show’s hosts  unlawfully snagging whitefish in the Trent River.  Mark demonstrated his natural leadership abilities by eagerly taking the initiative to undertake the lead role in this ten month investigation.  Mark’s perseverance paid off as he and his assisting officers were able to substantiate the complaint by providing sufficient evidence to successfully charge and convict the violators.

CO Bailie – Welcome to Belleville on the Bay of Quinte

The official award ceremony took place at the annual OCOA Conference on July 27, 2018 in Cornwall.  Presentations were made to Mark by MNRF Enforcement Branch Director Rick Watchorn and OCOA President Tim Rochette.

The Officer of the Year Award acknowledges officers like Mark, who demonstrate the highest level of dedication and professionalism among our ranks and pays tribute to the high quality of Conservation Officers we have in the Enforcement Branch and the Ontario Conservation Officers Association.

Please join us in congratulating Mark Bailie as our 2018 Ontario Conservation Officer of the Year!