This award is presented annually by the OCOA to a third-year student of the Natural Resources Law Enforcement program at Sir Sandford Fleming College in Lindsay, Ontario. This institution has been one of the the training grounds for Ontario Conservation Officers and other natural resources professionals for many years. Award recipients are listed below. 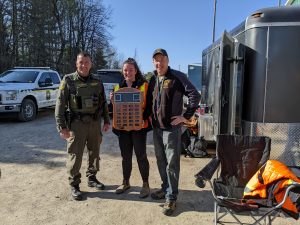 Reilly was recently presented with her award by Sargent Conservation Officer Colin Cotnam and Fleming College Coordinator for the Conservation and Environmental Law program Kent Hodgin.

Criteria for the award is as follows: “Awarded to the student who inspires and encourages classmates, equally and to the best of their ability, while displaying a professional approach to studies in the Natural Resources Law Enforcement program”.

The “Hogan Award” is named in houour of Conservation Officer Pat Hogan (1940-2015). Throughout his career Pat demonstrated the qualities of leadership and integrity, and was always there for his fellow officers. He never lost sight of this while he was a field Conservation Officer, CO Co-ordinator, Regional Enforcement Specialist, and Provincial Trainer. Even in “retirement” Pat continued his work to the benefit of Ontario’s people and resources, as the Co-ordinator for the Ontario Hunter Education Program at the Ontario Federation of Anglers and Hunters.

We congratulate the following recipients of the OCOA’s “Hogan Award”:

Recipients are selected by ballot by his/her classmates at the end of December each year. The bursary is given to the recipient at the commencement of classes in January. Plaques are presented at the college Awards banquet in April.