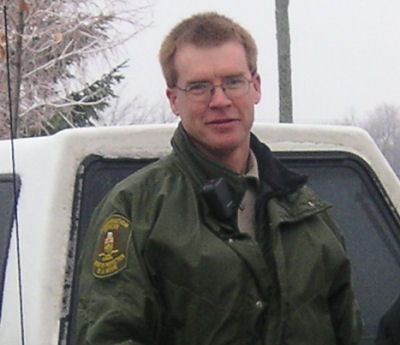 Conservation Officer Gary Rupert, of the Kemptville District Office, was the recipient of the North American Wildlife Enforcement Officers Association (NAWEOA) “Torch Award” at its 2005 convention in BC. Since Gary was unable to attend the convention, Dave Palmer, a fellow CO from Belleville, accepted the award on his behalf.

Gary was presented the award at the annual Ontario Conservation Officer’s Association (OCOA) convention on August 12-13th, 2005 in Pembroke.

The “Torch Award” is presented to a conversation officer who has been in the job less than five years and performed outstanding work during that time. Gary was nominated by fellow Conservation Officer David Critchlow who was District Investigator for the Kemptville MNR.

Gary Rupert has been a conservation officer for three and a half years. Prior to this, he spent ten years as a deputy conservation officer. Although he was laid off by the ministry in the mid 1990s during a downsizing exercise, he continued to volunteer as a deputy, waiting for his chance at a full- time job.

In his three years as a full-time officer, Gary has exhibited excellent work and shown great concern for protecting the resource. He has been diligent at looking after his patrol area, Glengarry County, and also in picking-up an additional half county due to officer retirements. Gary has shown initiative in dealing with a long-standing problem by monitoring fish sales of a commercial fish processor and upwards of twenty restaurants suspected of dealing in illegal fish. In addition, he has taken the lead in ensuring fur harvesters make their mandatory harvest reports, setting the bar for his fellow officers. Similarly, he is always out front in assisting district biologists to obtain the resource harvest information that they require from resource users.

Gary has been active for many years in waterfowl banding, and has volunteered countless hours in the GreenWings program. He is also an instructor in Tae Kwon Do.