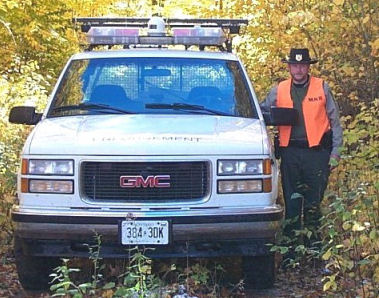 On August 27, 2000, Conservation Officer Dan Slater assisted in rescuing Nicki Peplinski of Renfrew from a burning vehicle, after she was involved in a collision on Highway 60, near Douglas, Ontario.

While off duty and travelling on Highway 60 with his wife and daughter, they came upon a vehicle that had been involved in a collision. The vehicle was on it’s side in the ditch and was on fire. A woman was trapped inside. After the vehicle was pushed upright by men at the scene, Slater and another man were able to remove Nicki Peplinski from the car while it was still burning. Officer Slater administered first aid to the injured person until emergency services arrived. Ms. Peplinski recovered from her injuries. Conservation Officer Slater is commended for his courageous lifesaving actions.