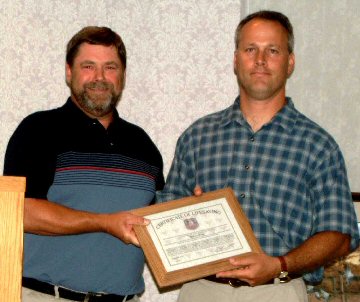 In mid October of 2001, Conservation Officer Richard Leblanc performed a rescue of a moose hunter whom had overturned his vessel.

While on a marine patrol in the Kenora District, Officer Leblanc observed a hunter in the water, clinging to his overturned vessel. The hunter was wearing bulking hunting clothes and had been in the frigid water for some time. He was obviously very weak from the onset of hypothermia. Officer Leblanc wasted no time in coming alongside and with the help of his Deputy Conservation Officer, managed to pull the distressed hunter into his patrol vessel. Officer Leblanc transported the hunter to a nearby hunting lodge and ensured the hunter was given warm clothing and was in safe hands before continuing on his way.