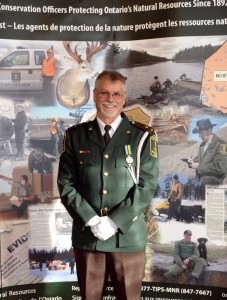 London – The Ontario Conservation Officers Association (OCOA) is pleased to announce that Steve Emms has been selected as the 2014 Conservation Officer of the Year. Steve currently works as a Provincial Training Specialist out of Thunder Bay, Ontario.

Steve was presented with the award at the OCOA annual general meeting on Friday August 8th. “Steve has been a Conservation Officer for 29 years and has had many great accomplishments. Steve is the first Provincial Training Specialist to receive this prestigious award.” said OCOA President Joe McCambridge.

Steve Emms has worked around the Province and some of his career highlights include: 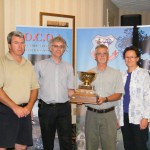 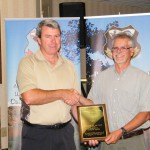 While accepting the award Steve indicated “he never really considered being a Conservation Officer a career, it is more a lifestyle and stressed that without the support of his family throughout his career, it would not have been possible.”

Steve was also presented with the Ministry of Natural Resources and Forestry (MNRF) Officer of the Year award by Lois Deacon, Director MNRF Enforcement Branch and Assistant Deputy Minister, Provincial Services Division Al Tithecott. Lois Deacon said, “Steve has a great ability to relate to officers and they in turn relate to him”.