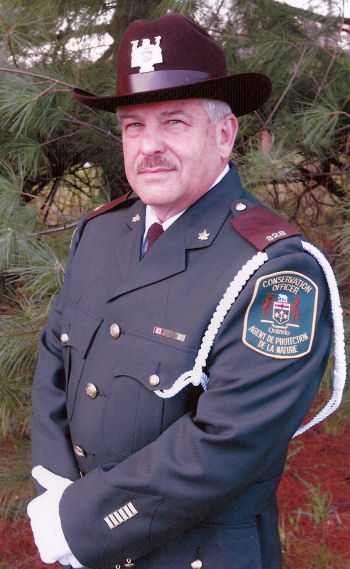 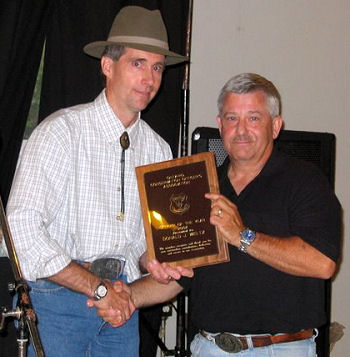 Don began his career as a Conservation Officer in 1975, in Aylmer District; for the past 15 years, he has worked with the Upper Great Lakes Enforcement Unit. He has been the lead investigator on a number of significant commercial fish investigations. Some of the highlights, which resulted in his award, were:

1) He was lead investigating officer in “Operation Shoe”. Don was the officer primarily responsible for the case management and ensuing convictions that resulted in record penalties in Ontario (highest fines ever levied for Fish and Wildlife infractions, and also precedent setting court order for the first time a commercial fisherman was ordered to install and maintain a tamperproof GPS unit on his vessels to assist MNR in monitoring their commercial fishing activities)

– Largest over quota in the history of the MNR;

2) He was the first and founding President of the Ontario Conservation Officers Association in 1979;

3) He was granted the first Canada-wide warrant ever issued in Ontario on a fisheries charge and subsequently as lead investigator, Don was the first Ontario CO ever to travel out of province to arrest and return an accused to Ontario for a prosecution under natural resources legislation;

4) He has provided a unique long time contribution to inter-agency joint forces specialized marine training, as a Launch II Course instructor with OPP, involved with recognition and identification of specialized large vessel operating skills as a job requirement for OMNR Great Lakes Conservation Officers, reflecting his extraordinary knowledge of marine enforcement, his commitment to and success at promoting interagency policing partnerships;

5) Don is recognized and respected within his community, profession and for his unwavering commitment to, not just natural resource protection, fairness and transparency, but also and more significantly towards improving the professionalism and recognition of Ontario’s Conservation Officers. 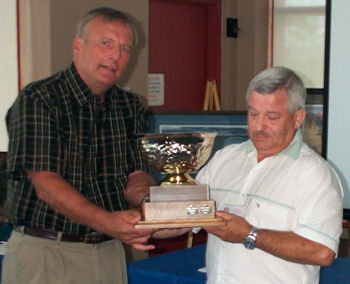 “Officer Don Weltz is being recognized as Ontario’s Conservation Officer of the Year because of the outstanding leadership and dedication to natural resources law enforcement he has demonstrated for the past 32 years,” said Natural Resources Minister David Ramsay. “Ontarians are fortunate to have skilled and hard working Conservation Officers to protect and promote responsible use of our province’s natural resources.”

Also present during this award presentation was Lois Deacon, Director of Enforcement Branch, who said, “Officers like Don Weltz set a very high standard for their profession and we are very pleased to see Don receive this recognition from his fellow officers.”

Don was nominated for the awards by one of his peers. The selection was done a committee comprised of both representatives of the OCOA and staff from MNR’s Enforcement Branch.