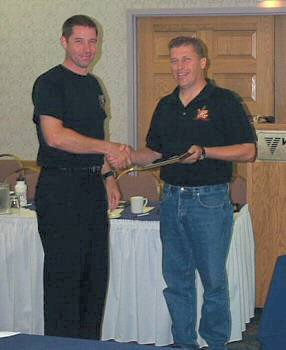 Aylmer CO Dirk Stuyck Receives Torch Award – The North American Wildlife Enforcement Officers Association (NAWEOA) -an 8,000 member organization of wildlife and fisheries enforcement officers from across North America – has presented an award to Dirk Stuyck, a Conservation Officer in Aylmer District. Dirk received the organization’s 2003 Torch Award for Ontario Region at the recent annual meeting of the Ontario Conservation Officers Association in Thunder Bay. The Torch Award is presented annually to an officer from each of NAWEOA’s regions to encourage the professional development of recently appointed officers. Nominees must have less than five years service as a "wildlife officer", and have demonstrated exceptional competency and initiative including in the field of public education. Dirk, a native of Belgium, was hired as a Conservation Officer – French Language Services – in Aylmer District in 2000. He had previously served as Assistant Park Superintendent at Fitzroy Provincial Park. Dirk is vice-chairperson of the Customer Services Standing Committee in Aylmer District.

Dirk’s colleagues in Aylmer District are very proud of his success.