A new commemorative medal was created to mark the 2012 celebrations of the 60th anniversary of Her Majesty Queen Elizabeth II’s accession to the Throne as Queen of Canada. The Queen Elizabeth II Diamond Jubilee Medal is a tangible way for Canada to honour Her Majesty for her service to this country. At the same time, it serves to honour significant contributions and achievements by Canadians.

During the year of celebrations, 60 000 deserving Canadians will be recognized.

The Chancellery of Honours, as part of the Office of the Secretary to the Governor General, administers the Queen Elizabeth II Diamond Jubilee Medal program. 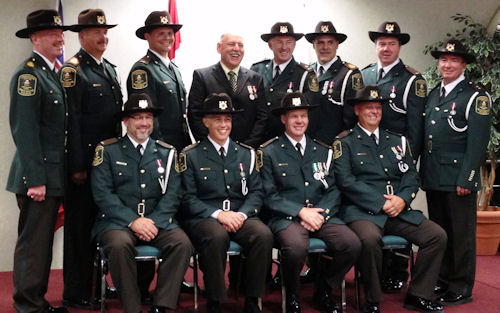 It was a great honour for me and several members of the Enforcement Branch management team to present medals to current and recently retired Conservation Officers during a ceremony in Ottawa on the weekend of September 30, 2012.

Thirteen members of our staff were recipients of Queen Elizabeth II Diamond Jubilee medals. These medals are presented to officers who have achieved excellence and demonstrated a commitment to the growth and prosperity of our communities, province and country.

I am very proud of our Conservation Officer medal recipients and this weekend was one of the highlights of my MNR career.

Please join me in congratulating our colleagues.