2020 Ontario Conservation Officer of the Year 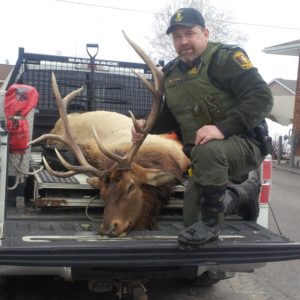 Temiskaming Shores – The Ontario Conservation Officers Association (OCOA) is pleased to announce that Mike Schenk has been selected as the 2020 Conservation Officer of the Year. Mike is part of the Ministry of Natural Resources and Forestry (MNRF) North Bay Enforcement Unit working out of the New Liskeard office.

Mike has been employed with MNRF across Northern Ontario since the early 1980’s and been a Conservation Officer for over 20 years, the last 18 of which he has patrolled the Temagami area.  He has proven throughout his career to be an outstanding officer, widely respected and relied upon by officers and staff from internal and external organizations.  This is evident by the long list of people that supported his nomination.  “Mike is a very deserving recipient of this year’s award,” said OCOA President Sean Cronsberry, “Mike has been an invaluable asset to our profession over the years, both as a skillful investigator and as an instructor.  In the field, Mike is among the best officers we have at taking statements and conducting thorough investigations.  In the classroom, Mike is a captivating speaker who speaks from experience.”

Mike is an accomplished investigator and instructor who has demonstrated his commitment to the job and to protecting the public and our natural resources.  Some of Mike’s career highlights include:

Upon learning he had been selected as the 2020 Conservation Officer of the Year, Mike said, “I am truly surprised and humbled by this award.  I was raised in a family environment full of outdoor adventure accompanied by terrific lifelong friends, so a career in natural resource management and enforcement was an excellent lifestyle fit for me.  I share this award with all the dedicated officers and MNRF staff that I have worked with over the past 36 years, we have effectively learned and supported each other in the pursuit of sound resource conservation.  It has been a privilege to be an Ontario Conservation Officer, I wish I could turn back time so I could live the adventure all over again.”